skip to main | skip to sidebar

The Lambda free light chain proteins continue to go up.  Rebecca stopped the current treatment plan a couple of weeks ago.  It was 1 mg/meter squared of Velcade on days 1 and 8 along with 20 mg of Dex and 20 mg a day of Revlimid on days 1 to 14 and then take 7 days off for a 21 day cycle.  The day she took the Velcade subcutaneous shot the peripheral neuropathy would increase.  It did seem to go back to the normal level after a few days.
The current plan now is to have a PET scan and bone marrow biopsy.    This is schedule for the first part of May.  Then all her records will be sent to Vanderbilt in Nashville to see what they can offer.
She has been indicating the back pain has been getting worse at times.  I wonder if the myeloma is located in the vertebrae and starting to cause more pain.  The PET scan should show the location of the myeloma. 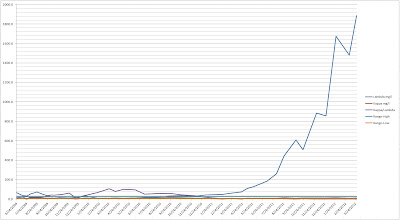 The Lambda light chain number doubled in the last month.  We had an appointment with our Doctor today to discuss this.  He is recommending we change to a different treatment plan.  She will stop the current treatment plan today and take a break until next Tuesday.  Then she will take 1 mg/meter squared of Velcade on days 1 and 8 along with 20 mg of Dex and 20 mg a day of Revlimid on days 1 to 14 and then take 7 days off for a 21 day cycle.  The Velcade will be given subcutaneous.  She had taken this before as IV and developed peripheral neuropathy and still has it.  So if it makes this worse she will have to discontinuous taking it.
The other issue is that her blood counts have been decreasing since she started taking the Revlimid.  Her platelets is down to 47 now.  Her immune system is also compromised. 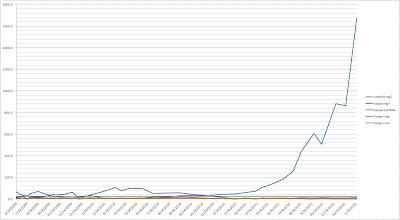 Continuing with Revlimid and Dex

We are hoping the Revlimid and Dex will do a number on the myeloma.  Rebecca is still doing a good job of putting up with all the difficulties of this monster.  She has been taking 25 mg/day of Revlimid on a 21 day cycle on and 7 days off along with 8 mg of Dex on days 1, 8, and 15.
The 24 hour urine test on 12/30/11 showed a little over 600 mg of Bence Jones protein.  This is the Lambda free light chain protein secreted by the myeloma cells that make it through the kidneys into the urine.  It is important that these pass through the kidneys and not clog the kidney filters up.  She has been keeping her fluid intake up.  This number was 3647 mg/24hrs on 2/27/09 when she was diagnosed.  Her creatinine has been stable at 1.1 for the last year. 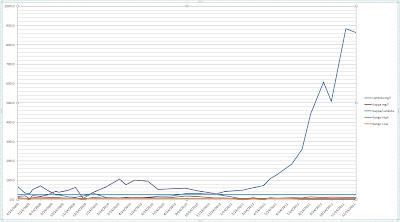 Back on a Chemo Treatment Plan

The cancer marker number continues to increase at an increasing rate.  Rebecca started taking Revlimid a couple of months ago.  The first cycle was 10 mg/day for 21 days on and 7 off.  The doze was increased to 15 mg/day the second cycle.  Our oncologist wanted to start out with a low doze to see what the side effects would be like.  She will start the next cycle tomorrow with 20 mg/day of the Revlimid along with 20 mg of Dex on days 1, 8, & 15.

The first two cycles of Revlimid doesn’t appear to be doing much from looking at the Lambda free light chain protein trends.  Hopefully adding Dex will help.  I have added the rate the Lambda number is changing per day to the one graph.  Divide this number by 100 to get the correct unit of measure of mg/L/day.  The rate of increase has decreased per the last test so maybe the Revlimid is doing something.
The pain from the peripheral neuropathy seems to be getting a worse.  She does get a little relief by applying some Neuragen.  She is still taking the oxycotin and oxycodene.  I wonder what her tolerance to this is since it doesn’t seem to give her much pain relief.

Our venture to the new pain clinic didn’t go well.  Rebecca has a difficult time waiting a long time sitting in a wheel chair.  After waiting about two hours for the doctor we left.  They called us later and we went back the next day.  Only waited 15 minutes to see the doctor.  That went pretty well.  The plan was to evaluate having a pump installed to inject the pain medicine directly into the spine.  However, they scheduled us to go to several classes.  When we went to the first class two weeks later we didn’t like this approach.  It felt like it was a behavior recovery meeting.  We left that class early on.

Rebecca has been doing a good job of managing the dysfunctional digestive system.  She feels the domperidone is helping to prevent an other ileus.  She has had a few times where she thought she was going to have an ileus.  She would tell me to get things ready for the trip to the ER room.  But she got it to pass.  We have not been back to the hospital for 4 months now.  That is pretty good since the last ileus was only 6 weeks after the previous one.  An ileus is very painful and discomforting.  She errors on the side of keeping the stools too loose in an effort to prevent an ileus.  She also has incontinence when she sleeps so this puts a big clean up effort on her and I.  She is embarrassed about it and doesn’t let me help as much as she should.

Rebecca’s mobility continues to be very limited.  She seems to be having more pain when she tries to walk.  That is why I wonder if she is becoming more tolerant to the pain medication or are the fractured vertebrae re-fracturing.

We have an appointment with the neurologist next week.  She is continuing to take the seizure medicine.  I think she continues to have small seizures.  She continues to have some small jerks in her sleep.  The doctors thinks these are just normal muscle spasms.  The other tell tale sign is in the past the seizures seem to affect her memory and her personality.   There seems to be a little bit of this going on.  Her driver’s license was due to expire and I said she needed to get it renewed for the purpose of a picture ID.  She didn’t think they would renew it but we went anyhow and they did renew it.  She didn’t think they would renew it because of the seizures.  I had forgot about that.  Evidently the doctor forgot to send in the restriction. 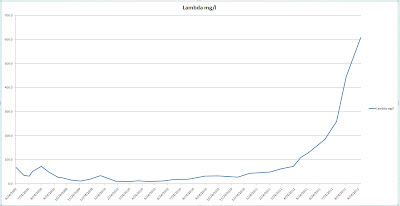 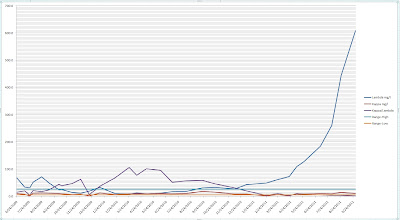 Visit to the Gastroenterologist

We went to the gastroenterologist yesterday. He gave her a prescription for domperidone. I drew a blank at the first three pharmacies. The FDA has not approved this drug. It is used in other countries. There is a cardiac arrest risk. I think it is pretty low and may be associated with the IV application.


He also wants her to have an x-ray with barium. That is scheduled tomorrow.

We have an appointment with another pain clinic on Monday. Hopefully they will have some options for the compression fractures.
Posted by Jerry at 7:31 AM 1 comment:

Still in the Hospital

They took an x-ray the next day and the blockage had resolved. They left the tube in until the second day to make sure she didn't need it any more. They first put her on a clear liquid diet. Then when she did okay with that they let her have some solids.

Her platelets tested 130 the first day and 104 this morning. The doctor said she could go home today. The potassium and magnesium tested low today. Now they want us to wait until another blood test to check on these again. So we have to wait until 6:30 to take the blood for the magnesium test. It will be late today before we get out of here.
Posted by Jerry at 3:32 PM No comments:

In the ER with another Ileus Attack.

I drove Rebecca to the ER this time rather than calling 911. She had to sit in a wheel chair awhile before they could find a room with a bed. Her back was hurting bad and she wanted to lay down. I guess I should have called 911 and we would not have had that problem.

The X-ray confirmed she had the blockage in the intestines which is called an ileus. Her's could be due to the pain medication, spinal nerve damage, the damage from the radiation treatment she had a couple of years ago, or something else. This is very painful. It is like a twisted gut. She had a fundal placation about 20 years ago and she cannot vomit. She just has dry heaves which causes more pain.

They put a nasal tube down into her stomach and that has given her some relief. She is still nauseated but doing better than when we first arrived here.

This same thing happened about six weeks ago. They are going to admit her and do a Cat Scan with contrast to see if they can determine what is causing this.

Her blood counts have recovered to the low end of the normal range. Her platelets were 130. They were about 90 two weeks ago and about 40 four weeks ago. It is good to know her bone marrow is still working pretty good.
Posted by Jerry at 5:02 PM No comments: